a
1
2
3
4
5
6
6
7
8
9
A
B
IMPORTANTTo read the national and local advice about coronavirus
CLICK HERE
CLOSE
Contact
Open Hours
Vaccines
Destinations
General
Need some help?
Email Us
Ambulance
999
NHS
111
Daisy Hill Hospital GP out of hours phone no:
028 383 99201
Fax :
0044 (0) 28 30265677
Online Shopping
0300 303 3380
Pharmacy
McNally's Late Night Pharmacy
0044 (0) 28 3026 2110
Social
Facebook
* Please be advised that we record all incoming and outgoing calls. This is for training and quality purposes and to protect both our staff and patients
Usual
Opening Hours
Monday
09:00 to 22:00
Tuesday
09:00 to 22:00
Wednesday
09:00 to 22:00
Thursday
09:00 to 22:00
Friday
09:00 to 22:00
Saturday
09:00 to 20:00
Sunday
09:00 to 18:00
Holiday
Opening Hours
Our opening hours may vary from branch to branch. Visit our branches page to see the opening hours of your nearest branch.
See Branches
Cholera
Diphtheria
Hepatitis A
Hepatitus B
Japanese Encephalitis
Meningitis A,C,W, and Y
Polio
Rabies
Tetanus
Tick-borne Encephalitis
Typhoid
Yellow Fever
Africa
Antarctica
Asia
Australia & Pacific
Caribbean
Central America
Europe
Middle East
North America
South America
BLOGS
What we have to say about your health and well being
Search...
BLOG
What we have to say about your health and well being
30
May 2016
Hay-bands - Hayfever and rhintis relief 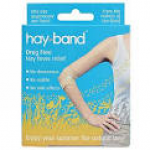 Hi All Hope the Marathon went very well yesterday. And you are all enjoying this lovely weather. Hay fever (or Allergic Rhinitis) is a medical condition which covers a number of symptoms and is characterised by inflammation of the nose, throat and sinuses. It is caused by a wide variety of agents or allergens. Conventionally hay fever starts in the Spring and continues into September and the severity depends on the nature of the allergen to which the sufferer is sensitive. The reactions may be due to pollen (from grass, trees or other plants ) household dust, animal dander or house dust mites. With household allergens, the symptoms may manifest themselves as asthma. The symptoms from one sufferer to the next varies immensely. They may be as mild as an itchy nose or in extreme cases, a mix of painful watery eyes, blocked nose, sneezing, headaches, a loss of concentration and sleep disturbance. For many hay fever sufferers, the Summertime brings complete misery as they are unable to carry on with normal life. Approximately one in ninety people suffer from hay fever badly enough to consult a doctor and many more have it in a mild form. It is not known why people become hypersensitive to these allergens but it is likely that altered immunity plays a part. There is some evidence that there is a link between hay fever and asthma or eczema. We stock Hay-bands which are drug free season long relief. There is no drowsiness, its fast acting, re-usable and has no side effects. It is suitable for use by adults and children over the age of 3. Hay-band should not be worn during pregnancy. Call in we are open until 10pm tonight


Don't show this again
MENU
Main Menu
No Results
Shopping Categories
More Categories
In Store Shopping
More Products
Online Shopping
More Online Products
Health
Search Health Articles...
Search Medicines...
Coronavirus Advice
Admin Tools
Settings
Volume
Text
Device
Your Basket
In Store
Total
Checkout
Online
Total Excl VAT
VAT
Total
Checkout
Live Chat
Live chat is currently disabled. Toggle the switch to make yourself available for live chat.
Active
Pending
Type your message and press enter to send, An administrator will reply to you shortly
Chat...
Send
End Conversation
Back to Chats
Please select a branch to view orders, patients and history...
Website
BeWell Console
Select Branch
Order In
Patient Orders
Pending Orders
Complete Orders
Order History
Patients
Register Reminders
Statistics
Configure
Log Out
Speciify which content you wish to enable on your site
Flu Pages & Content
Medic Spot Covid Test Pages & Content
Medic Spot Travel Planner
Online Doctor Pages & Content
Testimonials Pages & Content
Travel Clinic Pages & Content
Appointment Booking Pages & Content
Back
Next
What do you want to do?
Visit the website home page
Visit the website page for my pharmacy
Change my pharmacy
Back
Next
1
2
3
4
5
6
7
8
9
10
11
12
13
14
15
16
17
18
19
20
21
22
23
24
25
26
27
28
29
30
31
Back
Next
Please provide your email address you use to login to your account, we will then send you a password reset code.
Email
Back
Next
Back
Next
The following list shows all the items you have placed orders for, click on an item to see all the dates you have placed an order for the item.
Back
Next
Please provide a little more information to finish setting up your account...
Which of our stores you use
Are you registered for GP online services?
The surgery you are registered with
Are you exempt from prescription charges?
A contact telephone number
Your home address
Messages
No new messages
Important: Your record may contain sensitive information. If someone is pressuring you for this information, contact your GP surgery immediately.
Your surgery does not currently allow you to place orders via GP online services. Please contact your surgery to resolve this or click here to unlink.
Online prescription ordering is not currently enabled for your branch. You can still store your items and set reminders to re-order.
You haven't set up any reminders to reorder your prescription items. Click here to setup reminders now
Your recent prescription orders
What do you want to do?
Change User
Order
Manage
Pharmacy
History
Purchases
Log Out
Please enter your login details to access your account...
Email
Password
Keep me logged in
Help! I have forgotten my password
Back
Next
To keep your password secure you will periodically need to change it. Please provide a new password to login to your account.
Email
New Password
Back
Next
If you have an NHS account you can use it to login to your account. By doing so we can automatically collect information required to connect to your GP online.